When a Deadly Bug Made a Beeline for the Director

“I felt like somebody had just shown me an alien species or something for the first time,” the director of Discovery+’s new documentary Attack of the Murder Hornets told MovieMaker. “I’ve been imagining seeing it for so long. I’ve been reading about it. And then all of a sudden, I’m with the entomologist, and he’s holding it in his hand and making observations on it. It was just exciting.”

The documentary, which debuted Saturday on Discovery’s new streaming service, follows the U.S. arrival of the Asian Giant Hornet — an invasive species nicknamed the “murder hornet” — and the havoc it will likely wreak on the honeybee population if it’s not exterminated.

Also Read:  Behind Her Eyes and Astral Projection: Things to Consider Before You Try It at Home 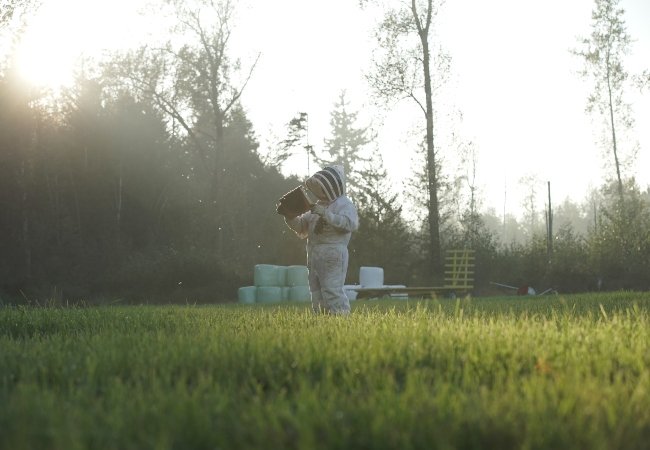 A beekeeper pictured in Attack of Murder Hornets, the Courtesy of Discovery+

Washington beekeeper Ted McFall learned the dangers of the murder hornet firsthand last year. The story of how he lost an entire colony of thousands of bees to a murder hornet attack gained national attention after a New York Times story came out in May, giving Stephenson the idea to get in contact with McFall himself and film Attack of the Murder Hornets.

But following researchers on their quest to track down and eliminate a nest of murder hornets, whose venom can be deadly to humans in high quantities, proved to be a dangerous task.

Stephenson recalled having a particularly close encounter while filming a scene in which a hornet is successfully tagged with a tracking device, and then released back into the wild.

“When the hornet is on the apple before it takes flight, I was shooting that, and as soon as it took flight, it came right towards me and I dropped my camera,” he said. “Obviously in the movie, I cut out of it — it’s one of the regrets that I had. I wish that shot was a touch longer because it came right for me when it took off.”

The Best Worst Movie director, who had never worked with insects before the documentary, had to jump out of the way before the hornet could land on him.

“So that was a startling moment,” he laughed. 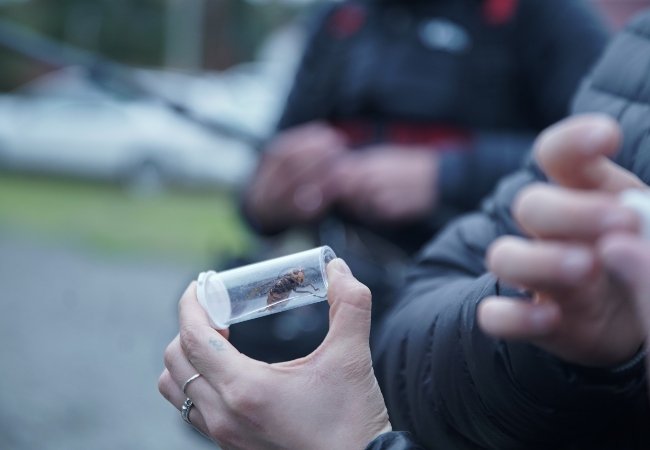 An Asian Giant Hornet in a vial pictured in Attack of the Murder Hornets, courtesy of Discovery

Although no one was stung by a murder hornet during the making of Attack of the Murder Hornets, Stephenson can’t say the same about honeybees, which are also featured prominently in the documentary.

“One of the things that was amazing about bees was the sound that they make when they’re just all around you,” he said. “It almost feels like your insides are vibrating.”

Wearing a beekeeper suit provided some comfort, but not enough.

“All of a sudden I look and I see this bee crawling up my mask or my face net, and I looked at it, I’m like, wait a second — that’s on the inside of my suit,” he added. “I had left part of the bee suit, the top part, open a tiny little hole, and it had crawled in there and then it stung me. And then, within like 10 or 15 seconds, I had six or seven other stings inside my bee suit. So the only thing that stung us was the bees.”

For that, Stephenson considers himself lucky.

Attack of the Murder Hornets is now streaming on Discovery+.

Main Image: An Asian Giant Hornet pictured in Attack of the Murder Hornets, courtesy of Discovery

Wallice’s “23” is a coming-of-age shredder

Billie Eilish’s AppleTV+ Documentary: 8 Things We Learned About The No Time To Die…