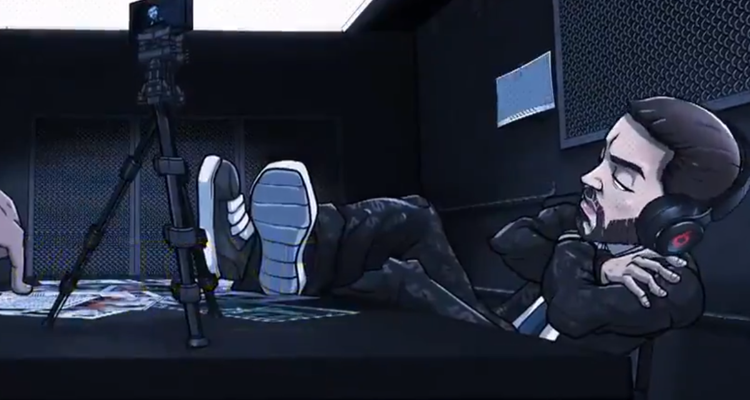 After TikTok tried to cancel Eminem, the rapper hit back by animating lyrics from “Tone Deaf.”

Eminem began trending again on TikTok last week for the lyrics from his 2010 single with Rihanna, “Love the Way You Lie.” Critics on TikTok say the song makes light of domestic violence and glorifies it. Others disagree – saying the song paints an authentic picture of the continuing cycle of domestic abuse.

Either way, TikTok users started a campaign to cancel Eminem for the millionth time.

Em posted the lyrics from “Tone Deaf,” where he raps about being canceled. The song appears on his latest album, Music to be Murdered By (Side B), which debuted in December 2020.

A Brief History of ‘Eminem is Cancelled’ Attempts

Part of Em’s allure to the masses is his ability to withstand whatever controversy his lyrics dredge up. It’s a challenge to the self-prescribed Rap God to be as offensive as he can to modern pop sensibilities. So let’s take a walk down memory lane to all the times Eminem was cancelled over the years.

In 2019, a leaked seven-second snippet of him rapping about siding with Chris Brown leaked. The clip is decades old and references the domestic violence between Chris Brown and Rihanna. In it, Em raps, “I’d side with Chris Brown, I’d beat down a bitch, too.” Rihanna has worked with Eminem several times in the past – and he’s since apologized in lyrical form.

On his track “Zeus,” Em raps – “And wholeheartedly apologies Rihanna for that song that leaked/ I’m sorry, Rih, it wasn’t meant to cause you grief.”


A freestyle rap in the music video “Shady Cxvpher” made headlines after a bar about punching Lana Del Rey.

“But I may fight for gay rights, especially if they dyke
It’s more of a knockout than Janay Rice
Play nice, bitch, I punch Lana Del Rey right
In the face twice, like Ray Rice in broad daylight”

Lana Del Rey hasn’t publicly commented on this lyrical tirade, but he has called Em “a master of lyrics.” Eminem’s lyrics are painfully uncomfortable on purpose. It’s a lyrical criticism of pop culture and everything that comes with it, whether you like it or not.

Kuro no Kiseki Gets First Gameplay, New Screenshots, and Plenty of Details