The Best Bluetooth Game Controllers For PC In 2021: Reviewed, Compared

Products featured are independently selected by our editorial team and we may earn a commission from purchases made from our links; the retailer may also receive certain auditable data for accounting purposes.

Gaming on a PC has a lot of upsides: better graphics, more control over settings, and a wider catalogue of games to play, but you’re stuck using a mouse and keyboard for controls. That’s fine if you’re playing a first person shooter at your desk (a mouse offers unparalleled control in this situation), but not if you want to kick back on the couch.

In that case you’ll want a Bluetooth controller, which lets you control your PC games like you would a console. Reliable wireless controllers used to be hard to come by, but they’ve gotten a lot better over the past few years. Issues like lag and operating system compatibility have largely been eliminated, especially with the rise of Bluetooth. You no longer need to plug a wireless adapter into your computer, install software, and hope for the best.

If you want to play the latest games in their highest possible fidelity, or revisit some classic titles that haven’t made it to console, a Bluetooth controller can make the experience a lot smoother.

What Are the Best Bluetooth Game Controllers For PC?

There are many factors to consider when choosing the best Bluetooth Game Controllers For PC; below are the most important ones, which we considered while we were researching this list.

Ergonomics: Holding a game controller for multi-hour gaming sessions can cause hand cramps, but we’ve chosen Bluetooth controllers with curved edges and ample spacing for buttons. You should still take a short break after every hour you play games.

Size and Weight: Two factors that contribute to ergonomics and comfort are the size and weight of the controller. All of our picks weigh a pound or less, which means they’ll feel solid in your hand without being too heavy.

Battery Life: Most of the Bluetooth game controllers we’re recommending run on rechargeable batteries that last about 20 hours per charge.

Compatibility: All of the controllers in this guide will work with a PC, but many of them can also be connected to game consoles. 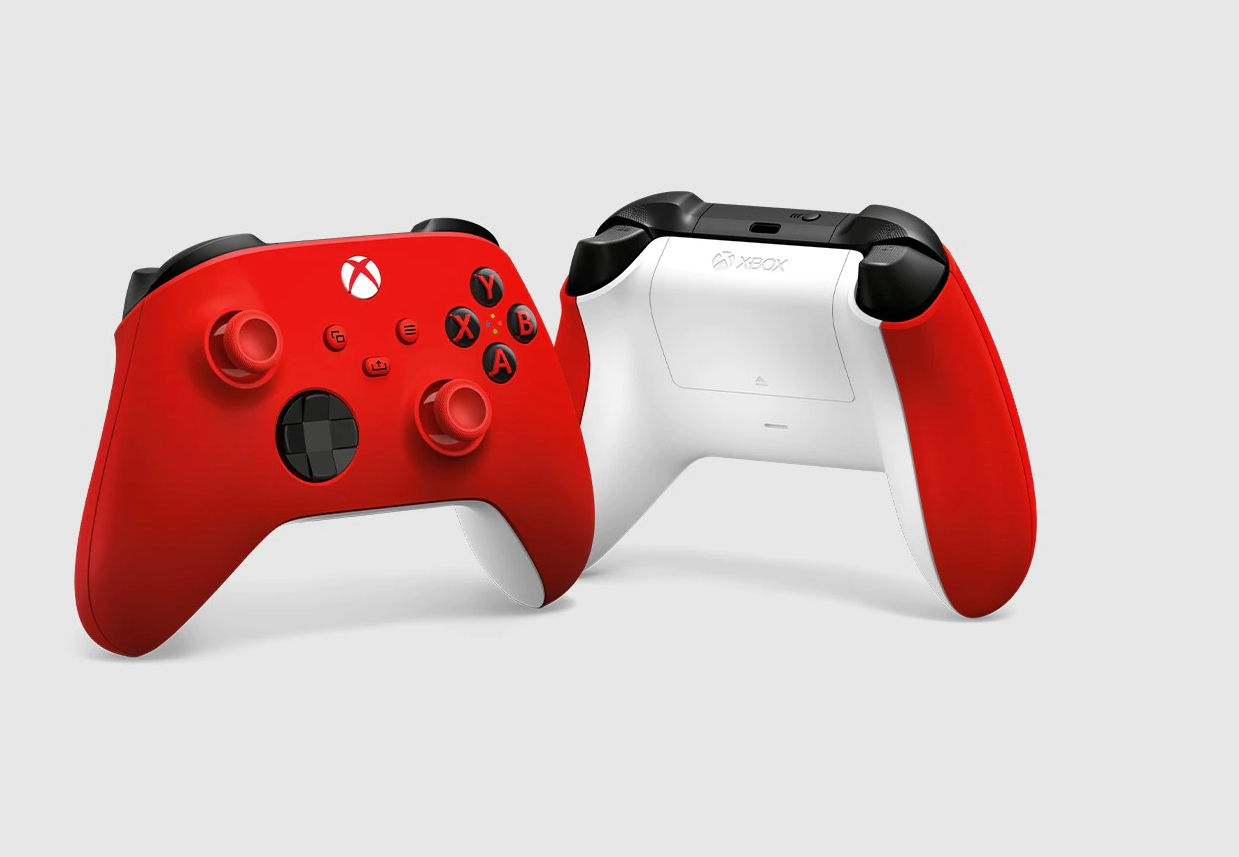 It’s no surprise that Microsoft’s Core Controller is our top pick. It was developed for the Xbox One game console, and offers a true console controller experience on the PC.

We’ve used a previous generation version of the controller a lot over the years, and have been impressed at just how good it feels in the hand. The smooth, curved handles make it easy to hold securely, even during long play sessions when our hands got sweaty.

The controller’s Analog sticks are ultra-responsive, its buttons don’t wobble when pushed, and the triggers have a satisfying spring when pulled. Microsoft’s controllers have traditionally had a so-so directional pad (the dark set of buttons beneath the top-left analog stick). The ones on this controller are better, but still not great. That isn’t really an issue because modern games rely on analog controls; if you play a lot of retro games, this is something to be aware of.

Microsoft’s Core Controller is the only one in this guide that runs on a pair of AA batteries. The company doesn’t say how long it’ll last per charge, but in our experience you should get about 20 hours of playtime. You also have the option of getting Microsoft’s Xbox Rechargeable Battery Pack, which lasts up to 30 hours per charge. You can use the Xbox Core Controller with a PC, Android device, or iOS devices.

Overall, it’s hard to beat Microsoft’s Core Controller if you want to play new PC titles from the comfort of your couch. Pairing it to your computer is simple, and you’ll get premium performance from the moment you turn it on, to the second you turn it off. 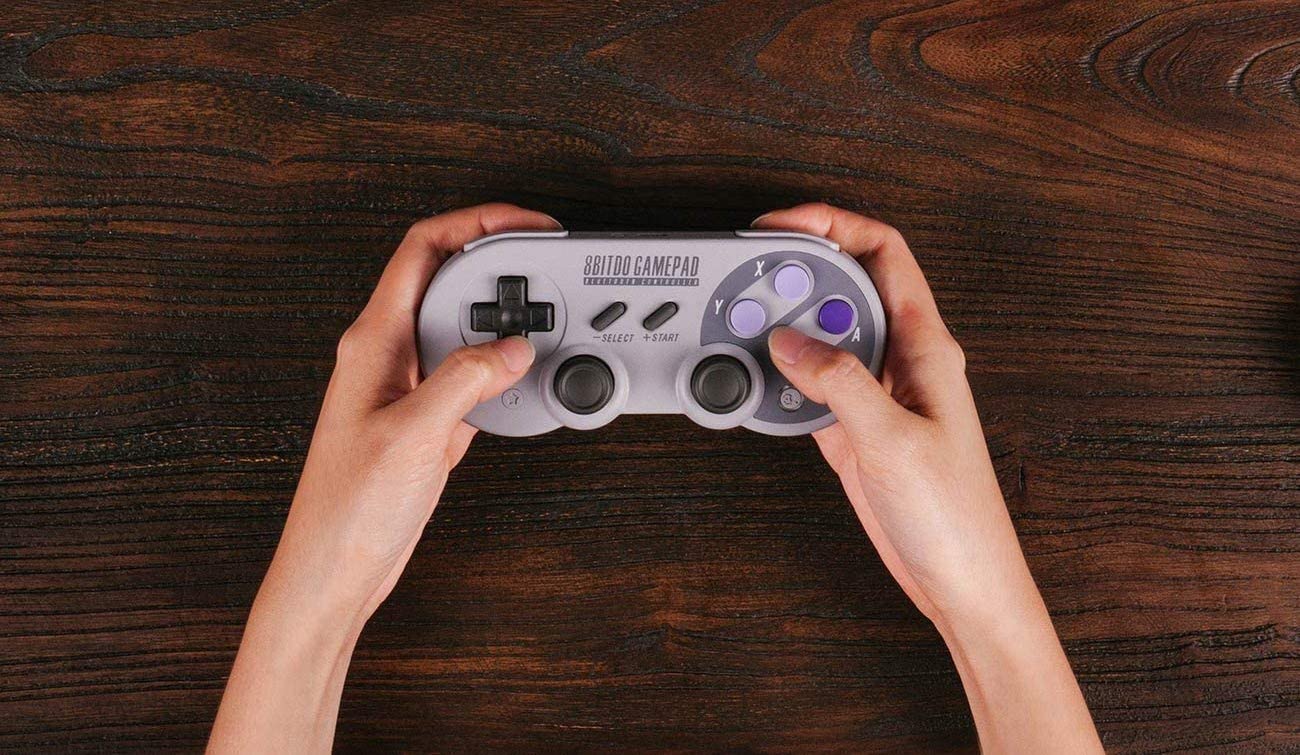 If you want to use your PC to play retro games, 8bitDo’s SN30 Pro is your best bet.

This Bluetooth controller is modeled after the one used for the Super Nintendo, with a nearly identical layout. The difference is the SN30 Pro has a pair of analog sticks on the bottom, which allows you to play modern games, too.

While we haven’t tried the SN30 Pro, the other 8bitDo controllers we’ve tested have felt great in the hand. Many consider the Super Nintendo controller to be one of the best game accessories of all time, and the SN30 Pro is a no-brainer if you fall into that camp. You can use this controller with a PC, Mac, Android device, NES or SNES Classic (with an adapter), or the Nintendo Switch.

The first thing we noticed when trying 8bitDo’s other controllers were the quality of the buttons, including the directional pad. There was never a dropped input or delay while using this hardware. 8bitDo says the SN30 Pro lasts about 18 hours per charge, and needs to be plugged in for about two hours once it’s depleted.

If you’d like to use your computer to relive some old memories from the 8, 16, 32, or 64-bit game console days, 8bitDo’s SN30 Pro is the right controller. 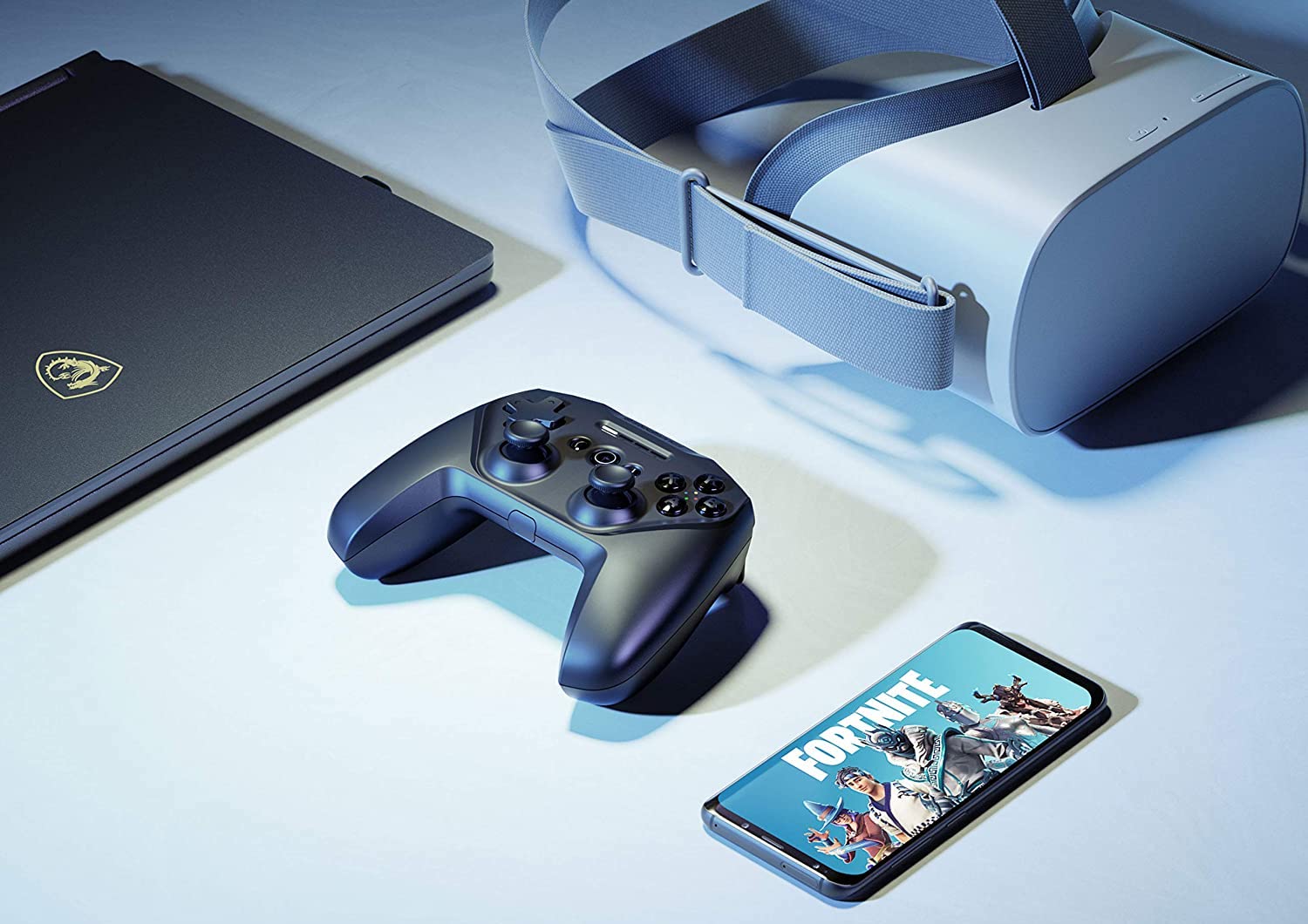 SteelSeries made a name for itself by making the best controller for playing games on an iPhone, but its Stratus Duo also works with PCs and Macs.

The button layout is similar to the one on 8bitDo’s SN30, with a pair of analog sticks on the bottom, plus-shaped direction pad to the left, and four buttons on the left. The overall shape is closer to Microsoft’s Xbox controller, which means it should be more comfortable to hold if you’re used to contemporary game console controllers.

The Stratus Duo can connect wirelessly using Bluetooth or a 2.4GHz frequency, but we recommend the former because there will be less interference. Many Wi-Fi routers use the 2.4GHz wireless band to connect gadgets (computers, smart-home accessories, smart speakers) to the internet, so there may be some congestion.

SteelSeries says the Stratus Duo lasts about 20 hours per charge, and can be used while it’s plugged in. It’s compatible with PCs, Android devices, or VR headsets like the Oculus Go.

If you like the feel of modern game controllers, but find their button layout hurts your hands, SteelSeries’ Stratus Duo may be the solution you’ve been looking for. 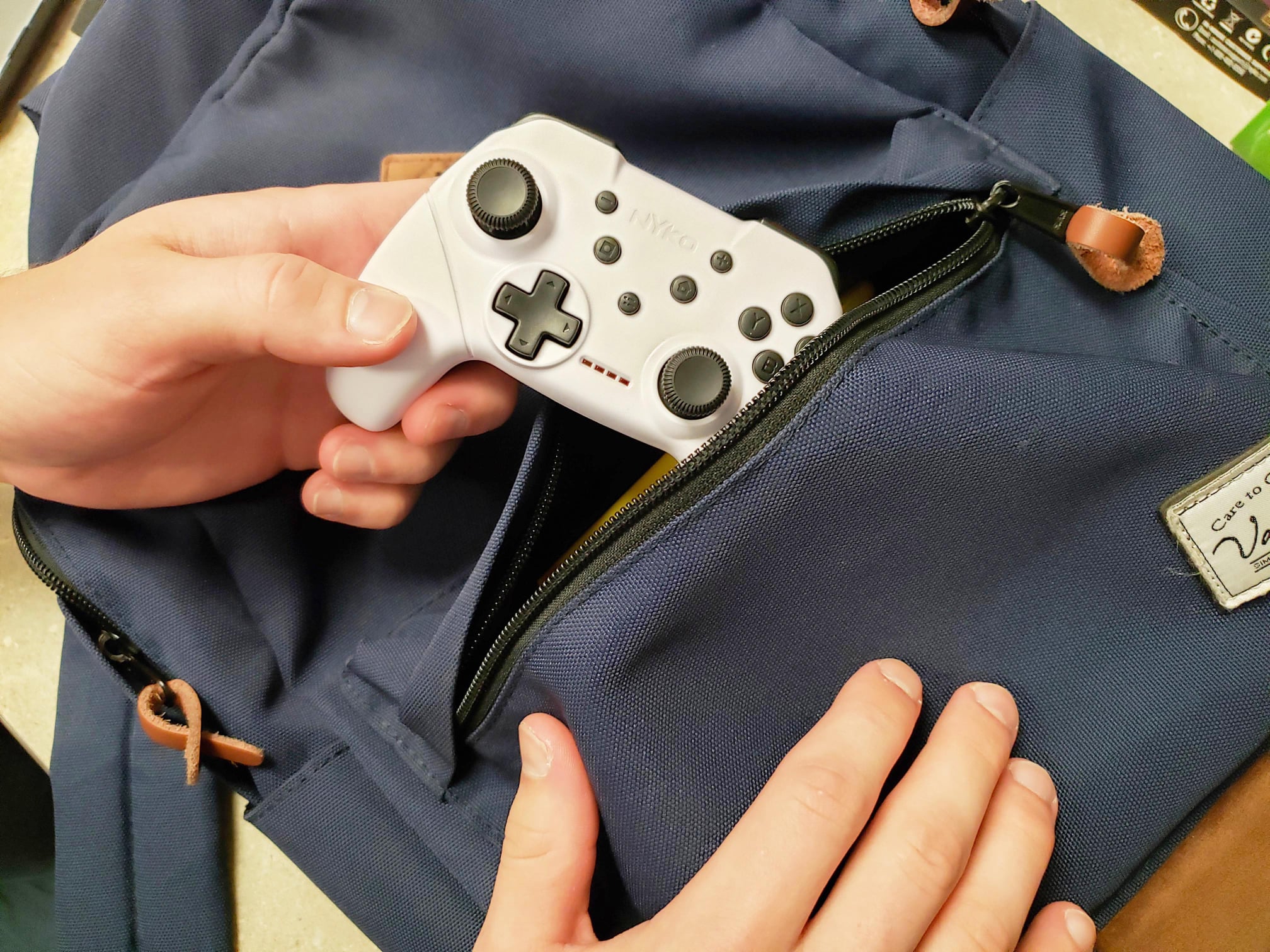 Nyko’s Mini Wireless Core Controller has a customizable turbo button that can make certain games a little easier to play.

The controller has the same layout as Microsoft’s Core Controller, but with a more standard plus-shaped directional pad. Its turbo button is located directly in the middle of the controller, and can be mapped to the A,B,Y,X, buttons or L,R, LZ,  RZ, triggers. Hitting the turbo button once will perform the same action over and over in rapid succession.

If you’re playing a first person shooter, you could map the turbo button to the trigger that fires your weapon to save you time. Some games don’t allow you to use a turbo button, and this functionality is generally banned from online play. Still, it’s a neat trick to have up your sleeve if you’re having trouble getting through a particularly tedious part of a game. Nyko says the Mini Wireless Core Controller offers up to 20 hours of playtime per charge.

Nyko’s Mini Wireless Core Controller is a solid choice for PC gamers who like to customize their controllers to suit the game they’re playing.

H.E.R on Contender “Fight For You” From “Judas and the Black Messiah”

Hillary Clinton to Be Played by Edie Falco in Impeachment: American Crime Story