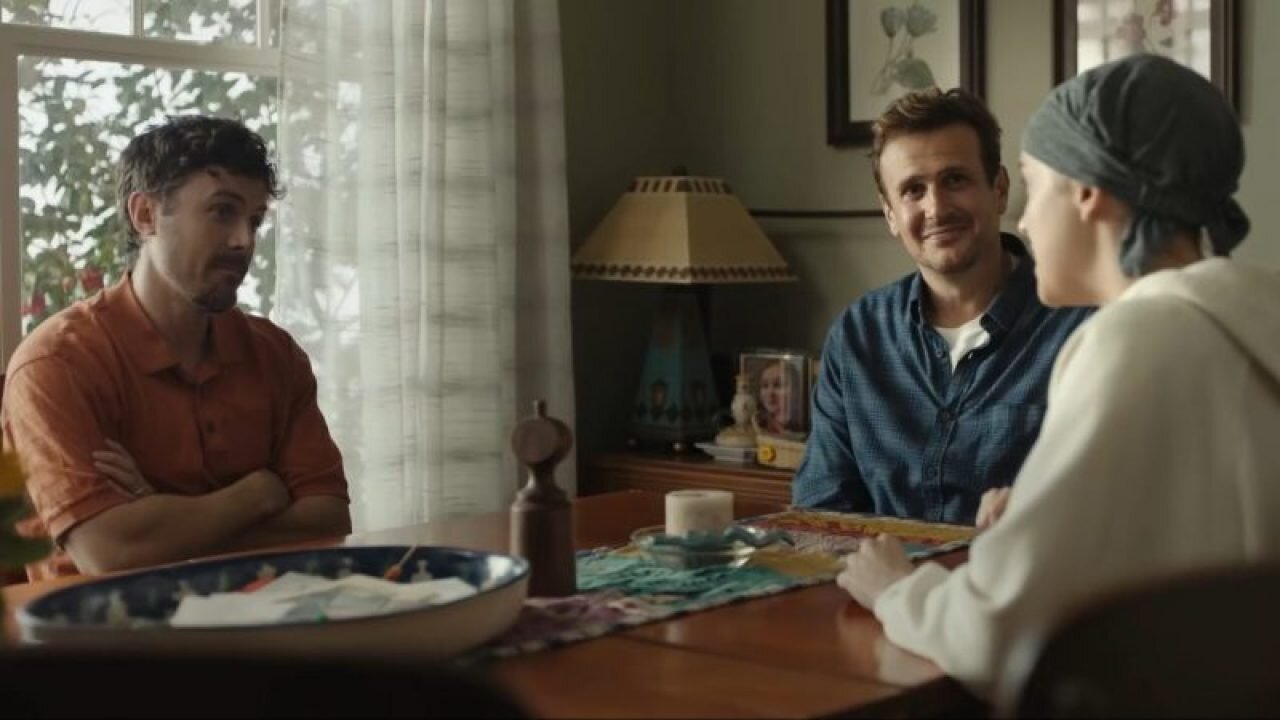 I was given the opportunity to watch the movie Our Friend over the weekend, and I jumped at the chance. I saw the poster for this film when I went to see Promising Young Woman in the theater, and was immediately drawn to the movie because of its stars. Jason Segel (Forgetting Sarah Marshall, How I Met Your Mother) is one of my favorite actors, and I am always impressed with the performances from Casey Affleck (The Assassination of Jesse James by the Coward Robert Ford, Manchester by the Sea) and Dakota Johnson (Bad Times at the El Royale, The Peanut Butter Falcon).

Before I dig in, I want to disclose that this was a very difficult film to watch. I cried throughout the entire movie, and it left me feeling pretty gutted. But I am a hardcore movie fan who loves to feel all the things that a film lets me feel, as long as I don’t feel manipulated into feeling that way. This film is genuine and honest, and it tells a heartbreaking true story that makes you feel like a spectator in the real time unfolding of these people’s lives.

Our Friend tells the story of married couple Nicole (Johnson) and Matt (Affleck) Teague. They have two daughters and are dealing with Nicole’s cancer diagnosis. When their lives are split between their homes and the hospital, their best friend Dane (Segel) uproots his life and moves in to take care of their kids and home and be another parent in their time of need. The movie skips around their timeline, revealing more about Dane’s personal life and struggles, as well as the inner workings of Matt and Nicole’s marriage. The film goes on to chronicle the end of Nicole’s life, including all the highs and lows of losing a loved one.

The movie doesn’t shy away from making each character flawed and real, and revealing their true humanity. It also faces the difficult subject matter head on, and does so beautifully. The movie was based on the article written by Matthew Teague titled, The Friend: Love is Not a Big Enough Word, and after reading it, it’s pretty remarkable to see how closely the film held to the truth of their story in several aspects. The film doesn’t get quite as ugly in the depths of Nicole’s final months as described in Teague’s article, but the shock of the incredibly gross and graphic nature of her death would be hard to tactfully delve into so deep onscreen. I think it was still well done, and I can appreciate them focusing more on the relationships and what they went through instead of the physical realities.

The three actors who took on these roles poured everything into their performances, and I truly hope we get to see them nominated for Oscars.

Our Friend is currently playing in theaters and is available to watch on VOD.

‘The Last of Us’ HBO Series Casts Bella Ramsey as Ellie

Chloé Zhao: 7 Things To Know About The Nomadland Director

Mortal Kombat 2021 Movie Score Will Have the Iconic Theme Song