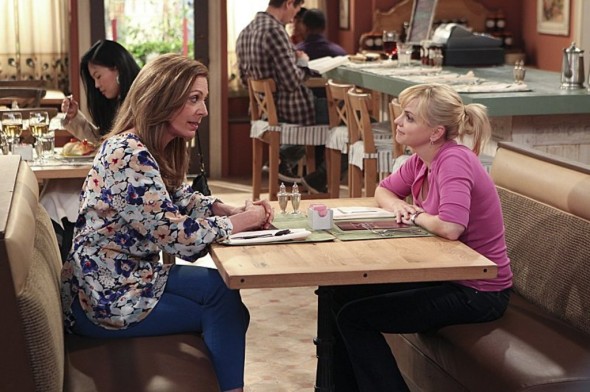 TV show description:
This comedy series follows a single mother named Christy (Anna Faris) who is newly sober and decides to restart her life in the Napa Valley in California. Her sobriety is tested by her mother, Bonnie (Allison Janney), who introduced alcohol and drugs to Christy at an early age and is also in recovery.

Bonnie’s working on repairing their mother-daughter relationship and is all too happy to offer insights into Christy’s mistakes.

Christy’s children are Violet (Sadie Calvano) a sarcastic 16-year-old, and Roscoe (Blake Garrett Rosenthal), an innocent and honest pre-teen. Violet has a sexually-active relationship with a long-haired clueless dude named Luke (Spencer Daniels) and Christy is worried that her daughter will repeat her mistake of dropping out and becoming a teen mother.

To make matters worse, Roscoe’s father, Baxter (Matt Jones), is back in the picture — at least for as long as the red van he lives in isn’t towed away.

Christy gets a job as a waitress at a posh restaurant that’s managed by Gabriel (Nick Corddry). He’s very supportive of her and they share a sexual attraction — unfortunately, he has a snotty wife named Claudia. Rudy (French Stewart) is the establishment’s thoughtless and temperamental head chef.

Christy tries to remain as positive as she can while pursuing her new path in life. Unfortunately, it’s an uphill battle thanks to a very dysfunctional support system.

What do you think? Do you like the Mom TV series? Do you think it should be ending or renewed for a ninth season?

Everything But the House: HGTV Sets Premiere for Lara Spencer (Flea Market Flip)…