One of the most memorable images in Minari — and there are many — is of a child’s delectably chubby legs waddling through the Arkansas woods. The legs belong to six-year-old David, the Korean-American boy at the center of Lee Isaac Chung’s quietly powerful family drama.

But they could be Chung’s legs, too. The writer-director calls Minari his most autobiographical project.

“The script started as an exercise of writing down a lot of memories,” Chung says in a phone interview from his Los Angeles home. “I had around eighty memories that I started to order and re-order and place in different characters’ timelines.”

Chung grew up in the 1980s on a farm in Arkansas. He had a heart murmur, a condition he’s bestowed upon the fictional David, played by acting discovery Alan Kim. Yeri Han and Steven Yeun play his parents, Monica and Jacob Yi, with understated emotion. They frequently forbid their son from running, for fear he might overexert his already strained little engine. So David does everything but run: He speed-walks, struts, clomps and stomps his way across the screen to guide us—clad in striped tube socks and sloppily-fitting cowboy boots — through a version of Chung’s childhood.

Minari might be the first film that brings him wide recognition, but it’s Chung’s fifth feature. His debut Munyurangabo (2007) premiered at Cannes, and his follow-ups Lucky Life (2010) and Abigail Harm (2012) made the rounds at festivals but never received theatrical releases. In 2015, he co-directed the documentary I Have Seen My Last Born. Making four micro-budget features over an eight-year period took a toll.

“The impulse to make films got away from me a little bit,” Chung says. “I felt I was more making films to make films, rather than really taking the time to consider what I was doing. That sort of thing becomes exhausting.” He took a break from filmmaking after his wife gave birth to their daughter to write, teach, and take an active role in raising his child. The inspiration for Minari came slowly, then suddenly.

“I started to feel like I needed to make something that was more urgent because I didn’t know how long I’d have to make films. I kept feeling like I’ll probably have to move on to do something more responsible with my life,” he laughs. “My family story was always in my head as something I’d like to do at some point.” 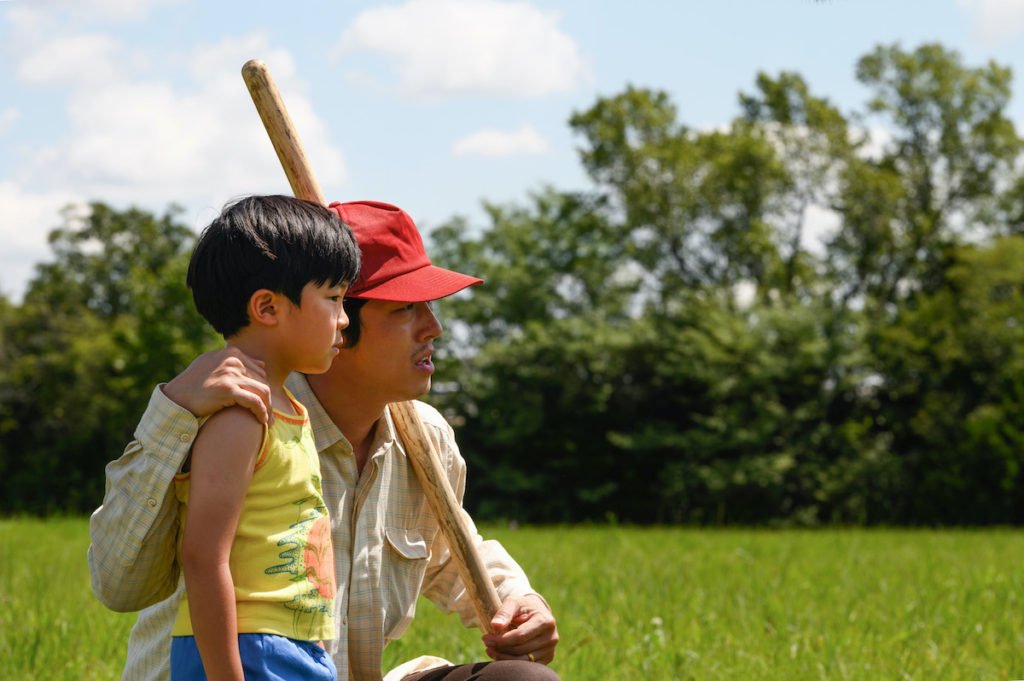 When Minari begins, the Yi family have just left their home in California for more fertile ground somewhere between Tulsa and Little Rock, where Jacob dreams of starting a farm specializing in Korean produce. “This is the best dirt in America,” he exclaims excitedly to his wife, when they first arrive on their expansive plot of land. Isolated from all signs of community, or any landmarks of civilization, Monica is less enthused about the practical realities of realizing her husband’s American dream. The nearest hospital is over an hour away: What if something should happen to David? She’s especially disappointed by the shabby, wood-paneled trailer that will apparently be their new home. “This isn’t what you promised,” she says.

But the couple settle into their new routine. They find work at a local hatchery as chicken sexers: determining the gender of baby chicks and separating them accordingly. At home, Monica carefully measures paper to line the bureau drawers and adjusts to incinerating her own garbage. Jacob buys a tractor and tills the soil in the speckled morning sun. They can’t afford water for both the house and the fields, so Jacob digs a separate well to irrigate his crops. “Never pay for anything you can get for free,” he tells David.

David spends most of his time palling around the property with his older sister Anne (a wonderfully natural Noel Cho) or making his own fun around the house. The camera follows him on his off-road adventures, hovering around his eye level to align us with his sense of wonder.

Working with Australian cinematographer Lachlan Milne, whose credits range from Taika Waititi’s Hunt for the Wilderpeople to Netflix’s series Stranger Things, Chung doesn’t allow David to be swallowed up by the vastness of his new environment. Instead, the focus is on his encounters with nature’s smallest marvels: a bumblebee buzzing in a field of wildflowers, a butterfly flitting between dewy blades of green grass.

“I love all that textural stuff,” Milne chimes in from Sydney, “when you bring in the environment and the landscape as part of the movie. And I love it editorially because you can change the pace and slow things down.” The land “can be harsh and inhospitable, but there’s beauty within that,” he adds. “It’s the sun on a daffodil, or the light through the trees.”

Milne, who had just seen the completed film for the first time the evening before we speak, says working with Chung was “one of the great director/DP experiences of my career so far.”

“I love how big a little film like that feels,” he says, noting the shoot was just 25 days. “I love how restrained we were in how we shot it. The performances are just so good. You don’t have to edit just for the sake of editing, you don’t have to cover something to give yourself the options. That takes bravery on Isaac’s part — a clear vision to say, ‘This is the film I want to make.’” 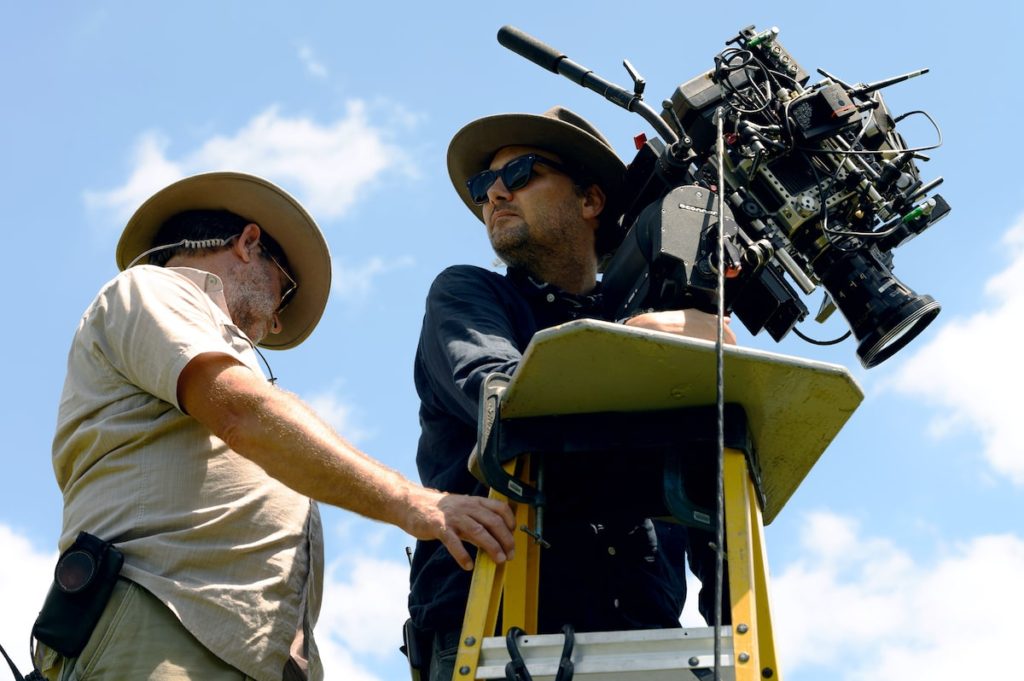 Cinematographer Lachlan Milne on the set of Minari, directed by Lee Isaac Chung

Minari pays loving attention to minutiae both natural and man-made: the stash of Mountain Dew in the family’s beige fridge, the fading floral wallpaper in their kitchen, the biblical black velvet painting hanging in their living room. Rather than placing generic signifiers of the decade, set decorator Hanrui Wang carefully combined vintage objects from Korea with knick-knacks found in Oklahoma thrift stores to create a well-loved and lived-in world mirroring the one Chung grew up in.

“The details were very important for me,” Chung says. “I didn’t know if they would come off as esoteric or not. I guess I was surprised that these very specific things seemed to be what resonated with people, things I threw in because they’re from my life, and I wanted to preserve them.”

At one point in the film, Monica’s mother moves in with the family. Played with a roguish twinkle by veteran actress Yuh-Jung Youn, she arrives from Korea to gleefully unpack giant bags of chili powder and anchovies from her suitcase. Monica is so happy she cries. David, who has never met his grandmother before, regards her with suspicion. “She smells like Korea,” he complains. (Though as Anne reminds him, he’s never actually been there.)

I tell Chung how much I love this scene, how it reminds me of my own grandmother flying across the continent with a frozen kosher brisket stashed in her checked luggage. “That’s great,” he laughs, though at this point he’s heard similar anecdotes many times.

The film’s resonance has been widespread, its critical reception rapturous. Minari premiered last year at Sundance, where it took home the U.S. Dramatic Audience Award and the Grand Jury prize. Chung has since been tapped to write and direct the live-action remake of Makoto Shinkai’s anime Your Name — a huge boon for his career.

“It feels very ironic to me, I guess,” Chung reflects when asked about the success of Minari. “There was a moment before I got the film green-lit that I thought A24 was not going to back it, and we were running out of time. I had this moment where I thought OK, that’s the end of my career.” 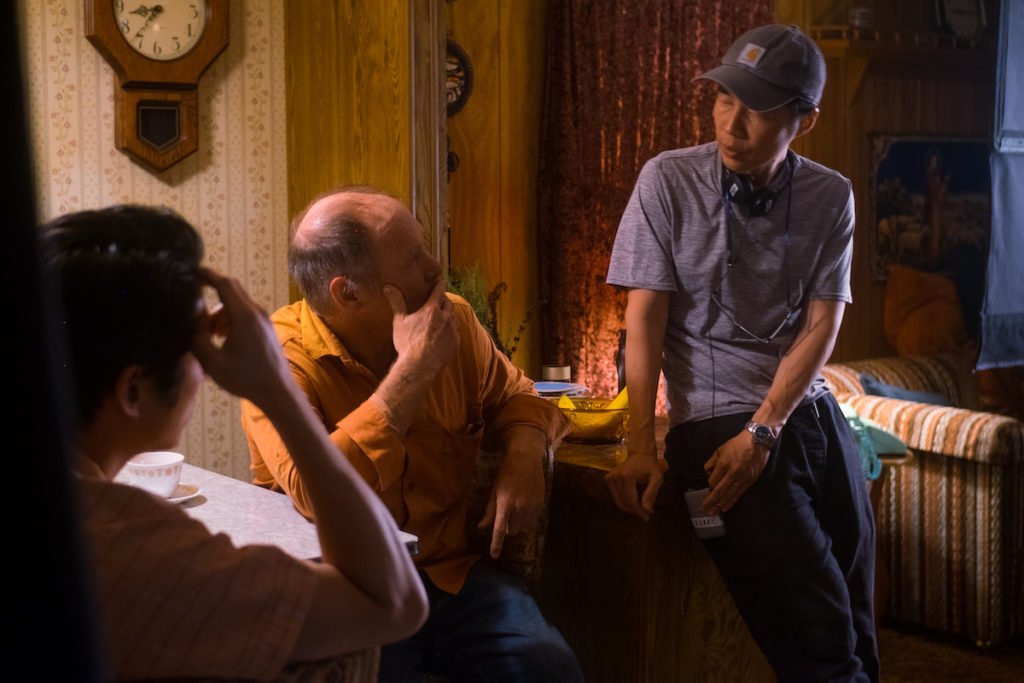 Chung is now about the same age as Yeun’s stoic father is in the film. His daughter is roughly David’s age. As it turns out, the experience of fatherhood was crucial to his ability to approach the story from multiple angles. Though the script clearly favors David’s point of view, it’s also subtly attuned to the shifting dynamics between the adults, offering snippets of parental and marital stress that David might see, but can’t quite comprehend.

“It almost felt like I was trying to write from the perspective of me and my daughter,” he says. “It was an interesting dynamic of finding my story within my dad’s story, blending them together and reaching an understanding.”

Though they get off to a rocky start, the bond that develops between David and his grandmother gradually becomes the film’s emotional center. She teaches David to play cards, encourages his sense of mischief, and defends him when the resulting misdemeanors get him into trouble. She even urges David to run. “He’s stronger than you think,” she tells his mother.

David is remarkably self-possessed for a six-year-old-boy: a testament to Kim’s natural charm as an actor and Chung’s construction of characters that are unapologetically themselves — not just in terms of their quirks and flaws, but in their identity as Korean-Americans. Starting life anew in Arkansas is certainly a struggle, but Minari is not an assimilation drama.

“I didn’t want the story to feel like it’s explaining immigrant life to people who have never experienced it,” the director offers. “Nor did I want it to feel like the characters have to explain themselves. For the most part that’s the way our family grew up in Arkansas. We were outsiders, but I have to say I felt quite at home. It doesn’t mean that I didn’t experience racism, and that racism doesn’t exist, but for this film the more interesting story is what’s going on within the family — the conflict at home.”

Chung cites influences on his film that include Willa Cather’s Nebraska-set novels, William Wyler’s iconic Western The Big Country, and John Ford’s adaptation of Steinbeck’s Dust Bowl classic The Grapes of Wrath. With Minari, he provides a new kind of entry into the canon of Americana — one that feels at home in conversation with the sparing realism of contemporary moviemakers like Kelly Reichardt and Chloé Zhao — rich in its minimalism and immense in its humanity.

Put in another director’s hands, the building blocks of this story might have resulted in a cloying melodrama. But Chung exercises grace and restraint — and draws such effortless realism from his actors—that we don’t just believe this family, we believe in them, too.

“At the heart of it, the film has a very sincere viewpoint,” Chung says. “But I tend to be very cynical. I think it might be that cynicism that keeps me going in certain directions,” he laughs. “Sometimes I see things that are melodramatic and I just don’t understand it. I have a tendency to go darker in my thoughts; I tried to fight against that and at the same time not do things that were false.”

Minari, written and directed by Lee Isaac Chung, opens wide and in virtual theaters on Friday.

The True Story That Inspired the Series