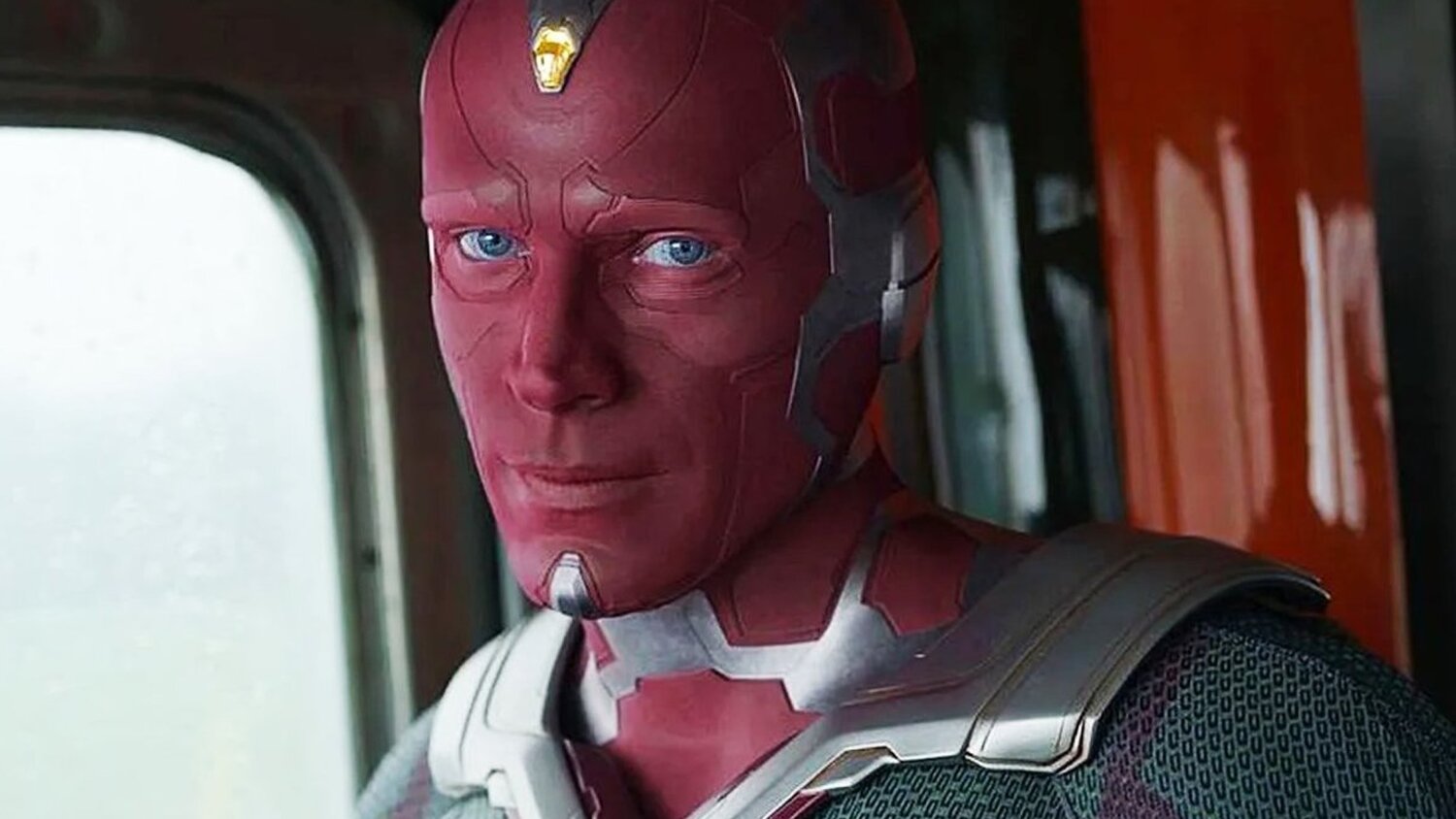 WandaVision episode seven gave us a Modern Family-themed episode with a title sequence inspired by The Office. The title of the episode is “Breaking the Fourth Wall,” and it confirms who the big bad villain is.

The episode picks up after Wanda expanded Westview’s boundaries to save Vision from being torn apart after he stepped outside those boundaries. Astrophysicist Darcy Lewis and dozens of government agents are also now a part of Wanda’s world, while SWORD agent Monica Rambeau and FBI agent Jimmy Woo escaped the expansion as they set off to meet Monica’s mysterious aerospace engineer friend, which ends up not being Reed Richard, but a character named Major Goodner, who is obviously loyal to Monica.

In a super unsurprising twist, it was revealed at the end of the episode that the seemingly real villain of the story is Agnes, a.k.a. Agatha Harkness, who is a witch. This is something a think a lot of Marvel fans knew all along, and all the speculation of Evan Peters playing Mephisto goes down the drain, as I suspected it would. It revealed that Agatha has been controlling everything all along, and that includes Pietro, a.k.a. Quicksilver.

Pietro didn’t play a big role in this latest episode, but he did show up in a post-credits scene! I don’t know what that means for the character, but he’s obviously under Agatha’s control. I don’t know if it was Agnus that pulled the character out of the multiverse, or if this was just some made-up thing to play with the emotions of Wanda and Marvel fans. Or, he could end up being a surprise character that has yet to be revealed.

A lot of Marvel fan theories were seemingly dashed in this episode with Mephisto, the multiverse Quicksilver, and Reed Richards. Turns out Monica’s friend was just some regular friend within aerospace that she had. They seemed to build that all up for a big reveal that fell flat. But I’m sure there are more surprises coming. Maybe all is not as it seems.

In the comics, Agatha is actually Scarlet Witch’s mentor. She helps Wanda get over the loss of her twins Billy and Tommy, and as you saw in this episode, the twins go off with Agatha and by the end of the episode, we don’t know where they are. In the comics, the twins were formed from fragments of Mephisto’s soul and then eventually reabsorbed by the demonic villain. Agatha then takes steps to ensure Wanda forgets they ever existed. Maybe Mephisto will play a part in the story through Agatha, but definitely not Pietro. Perhaps Agatha’s husband “Ralph,” who she mentions when she says, “Ralph says I sugarcoat things,” is the real demon? Her comment suggests that her unseen husband is worse than she is.

There’s also a hint with the prominently seen cicada on the curtain in Agatha’s living room, which is similar to the form taken by Mephisto in his first comic book appearance. So, Mephisto still is a possibility, but I don’t think Pietro is him.

Then there’s the post-credits scene where Monica arrives at Agatha’s house, and as she gets ready to enter the basement, she is surprised by a creepy Pietro, who pops up and says, “Snoopers gonna snoop.”

One of the other things we learn from this episode is that Monica is transforming and has gained a few abilities. It was explained that her DNA has been rewritten by going through the Hex barrier. She can perceive the electromagnetic spectrum, and it also looks like she can absorb kinetic energy when Wanda lifts her up in the air and then slams her onto the pavement. Also, the SWORD outfit she is wearing in Westview looks similar to her costume in the comics. Agatha and Pietro most likely don’t know about Monica gaining superpowers.

If passing through the Hex can change a person’s DNA, there’s Darcy and all of the other SWORD agents who also passed through, which I assume means their DNA has changed as well. I’m not sure what this means for the future lives of these people, but I guess we’ll find out. Could that be the beginning of mutants in the MCU?

However, when Monica passes through the Hex in this episode she hears several familiar voices and the things that are said come from several people in her life and what’s said reveals a few things about Monica’s past:

Young Monica: “Mommy, it’s OK. I can stay with Grandma and Pop-Pop.”

Young Monica: “Mom, maybe I could fly up and meet you halfway.”

Fury: “Only if you learn to glow like your Aunt Carol.”

Maria: “And you were the most powerful person I knew.”

Jimmy: “She was truly an inspiration. Sorry.”

Carol: “Your mom’s lucky. When they were handing out kids, they gave her the toughest one.”

There’s a backstory here that I’m sure we’ll eventually get, but it’s not hard to read between the lines of what happened to her mom and maybe explain why she got cancer and why Monica might be angry with Carol Danvers.

As for what happened to Darcy, she ends up being an escape artist in the circus. That is, until Vision finds her and wakes her up. Vision is looking for questions that he has, but there’s a lot that Darcy still doesn’t know. However, she does fill him in or what she does know.

He’s now made aware of the full trauma Wanda experienced during the events of Avengers: Infinity War, when she had to kill him to stop Thanos from getting the Mind Stone, only to watch him die again after Thanos reversed time. While it’s been five years since those events for the people who lived through the snap, Wanda was blipped out of existence, so when she returned, she was forced to deal with the trauma like it just happened. So, the grief is super fresh for her still.

I enjoyed the time that Darcy and Vision got to spend together. This was a fun Marvel character combo. While they are spending time together, they are stopped at an intersection for a while and Vision thinks it’s because she is trying to keep him from getting home. It starts with a red light, then it’s followed by a construction crew, and then there is a group of kids being headed across the intersection. I guess now we know where all the kids in the town are now!

I also just want to make an observation regarding Darcy’s circus outfit. It’s incredibly similar to the original Guardians of the Galaxy costume designs from the comics! I have no idea if there’s any significance to that, but I thought it was, at least, a cool nod.

As for what is happening with SWORD, director Tyler Hayward is determined to launch a strike against Wanda, and we learn that the WandaVision sitcom is no longer broadcasting. Either because Wanda is taking her “me day” or Agatha is now blocking it as she is moving forward with whatever her plans are.

Jimmy also doesn’t do much in the episode, but he confirms from Darcy’s email that Hayward wanted to bring Vision back online. It ultimately took Wanda’s power to get it done. Monica replies, “Hayward wants his sentient weapon back.”

We also got a new commercial in the episode for an antidepressant called Nexus. This connects to Avengers: Age of Ultron, when Tony Stark hacks into the NEXUS Internet Hub to discover that JARVIS scattered his artificial consciousness across the web to stop Ultron. This AI eventually becomes Vision.

In the comics, Nexus is a cross-dimensional gateway that provides a pathway to various realities, which also obviously fits into what is happening with WandaVision, especially with linking it to an antidepressant as Wanda creates her own reality to escape her trauma. The Nexus could also play into Doctor Strange in the Multiverse of Madness. Wanda is a Nexus Being in the comics, whose power can affect probability and change the flow of time.

The ad says, “A unique antidepressant that works to anchor you back to your reality. Or the reality of your choice. Side effects include feeling your feelings, confronting your truth, seizing your destiny and possibly, more depression.”

Just before Monica comes in to talk to Wanda, we see her taking some pills from a bottle with a similar-looking label. So, there’s a lot going on there with Nexus.

What did you all think of WandaVIsion episode seven? Are there any other things you noticed that you want to point out or any theories you’d like to share?

Daft Punk Is Breaking Up After 28 Years Together, Video Confirms